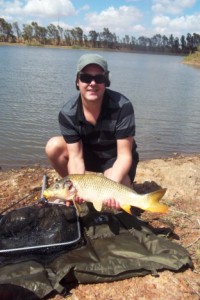 Water quality is a critical factor in anybody of water. A balanced aquatic ecosystem contains a fairly low population of algae and aquatic weeds, a healthy and stable amount of fish and invertebrates, as well as other forms of nutrient and oxygen levels.

An overpopulation of one or more fish species can impact the quality of water.

Competition for food is the major factor. One or more species can be completely eradicated by another more dominant species in a short time. Thin, small, underweight, deformed and/or under-nourished fish are a direct result of an over-population of fish. Attached photo an example of a deformed fish I caught in November last year at Misty Lake.

Because of their adaptability, carp have been very successful in their colonization of new environments. Carp uproot vegetation and stir up sediments during feeding, leading to increased turbidity. This in turn reduces light penetration to the bottom of the body of water, which in turn reduces the breakdown of dead vegetation on the bottom, which in turn causes the bottom to increase in size (which effectively makes the body of water smaller) and less oxygen becomes available. They also prey on organisms that eat algae and contribute to the natural breakdown of nutrients, and an over population will disrupt the balance of the eco-system, contributing in poor water quality.

Carp are prolific breeders, laying 50 000 – 100 000 eggs per kilogram of body weight. So let’s say a 10kg carp lays approximately 500 000 eggs in a spawn. Even if 0.1% of these survive, that’s still 500 extra carp that place more pressure on the bio-system! The rate at which carp breed and survive far exceeds the rate at which they die, which leads to over population and eventually poor water quality.

All invasive species such as carp, trout, bass and barbel in South Africa cannot be moved alive without a permit issued by the Department of Environmental Affairs. This is because of a number of factors, but the most important is because of possible diseases that they might carry. Imagine a sick batch of carp gets taken to a dam that is used for irrigation or drinking, those fish infect the other fish and all die – then the water cannot be used to irrigate or drink! It is also extremely difficult to move fish alive as they require special transportation enclosures that need to be oxygenated, which are costly. Nature conservation has also declined now to issue any permits for the relocation of Carp to another dam due to the invasive species status issued by current law.

It is also good to note that it is law to control these species in your private capacity and that they are legally supposed to be removed when caught. However, if proper management is performed and they can be controlled, it will be an asset to a body of water.

In the case of SACS, the fish removed from Misty Lakes are not wasted and are given to the locals, therefore also feeding the community.

Please do not stress about the future of fishing at our SACS dams. The amount of fish that are being removed has a very small impact on the numbers of fish present in the dams. SACS is removing the smaller, weaker fish so that the larger, more dominant strains thrive. In the end it will not only benefit our members by allowing them to catch larger fish, but it will also improve the quality of the water.

I hope this article has provided you with more insight into the matter.