The SA Carp Society aims to introduce a new culture of catch and release carp fishing in South Africa.

Although OutdoorPAGES, a number of local magazines and other actions have achieved a lot in recent years, we believe that we still have a long way to go, especially with our specimen carp stocks. In the next few months the SA Carp Society will identify various locations around the country where we will display catch and release messages on sign boards and stickers to get the message across. We believe that various companies, although they preach catch and release, do not practice it. For example, a web site, magazine or television show promoting catch and release must not publish photos / material which prove otherwise.

The SA Carp Society will act against web sites, magazines and television shows that show a total disregard of basic catch and release principles and practices detrimental to carp. These include handling of fish, rigs, baits and practices which are not carp friendly, specifically in a specimen carp fishing context. The SA Carp Society is not in the blame and shame game. We will use opportunities like these to educate anglers, publishers, organisers, etc. 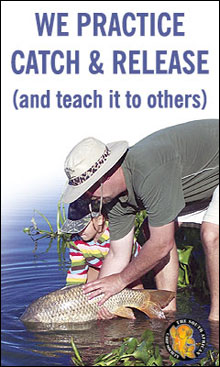